In the spirit of Barney Stinson, I would like to start a game here called "Have you met...?"

Meet Ohio Bobcats super freshman D.J Cooper . Cooper is having an outstanding first year campaign, leading all of the MAC in assists with 5.7 per game (he also has 23 more assists total than 2nd place John Boyer of Buffalo) and in steals with 3.1 per game (also blowing everyone out of the water in that category, 18 more than 2nd place Robbie Harman of Central Michigan) while still managing to rank 11th in scoring with 12.9 points per game. Pretty swell numbers for a true freshman if you ask me.

But why should Huskie nation care about D.J., other than the fact that he will be a one man show of no-look passes and pin-point dimes come Wednesday night at the Convo?

Well, Cooper just happens to be Tony Nixon's former high school teammate at Seton Academy in South Holland, Ill. Together, the two led their team to a State Championship in 2009. Off course, as some of you may know, Cooper not Nixon, was the main star and leader of the talented Sting squad. 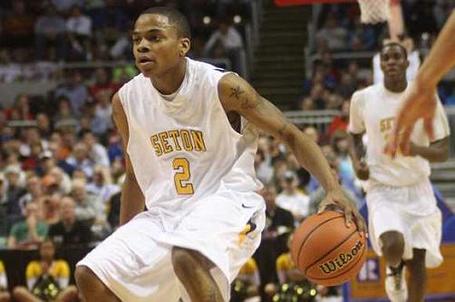 So did Coach Patton recruit the wrong player?

Not so fast. Yes, Cooper is having a freshman All-American type season, but it is not like Nixon has been a dud so far. Nixon showed flashes of the type of player he could be in a few years before Xavier Silas came back from injury, limiting Nixon's minutes on the court. Nixon's size and shooting ability make him a perfect fit for MAC basketball but we may not know what he is truly capable of until Silas graduates or Patton finds a way to fit them both on the court at the same time.

When it is all set and done, Patton might have ended up making the right choice by offering Nixon instead of Cooper.

But as of right now, Patton is looking like a fool with his pants on the ground, especially considering the Huskies struggles at the point guard position thus far. Cooper would have been exactly what the Huskies have lacked for a few years; a pass first point guard who can create his own shot when needed and plays swarming defense. A back court consisting of Cooper, Anderson and Silas would be incredible, but now one can only dream.

Oh, and he can rebound too. Cooper has 83 rebounds this season, an average of 4.6 per game. Sean Kowal, our second leading rebounder has 96 for the season. Then again, it is not like there is a whole foot between Kowal and Cooper (wait, there is, Cooper is 5'11").

Looking at Cooper's other two scholarship offers (Kent State and Loyola (IL)), it is plausible to think he might have chosen to call DeKalb his home. Unfortunately, we will never know.

So enjoy the Cooper show come Wednesday night (and for the next four years), because if his play this season so far is any indication of things to come, you might see a highlight pass or two. Too bad he won't be wearing cardinal and black.