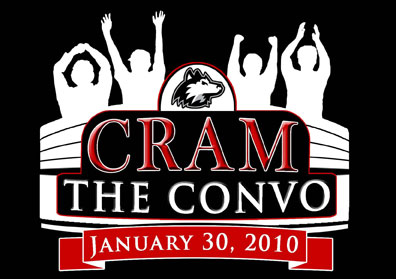 If there was ever a must-win game for the Huskies, this game is it*

*I'll likely say this multiple times before the season is over.

So you thought Ohio was the worst team in the MAC East? You thought wrong, brother! The Bobcats may just be the hottest team in the conference putting up 99 pts in each of their last 2 games. Yes the Huskies have to improve on defense if they want to win this conference, but NIU caught OU when they were white-hot. They may never have that type of offensive performance again.

The real meanders on the EAST SIDE? Why the Buffalo Bulls of course. After a respectable 3-0 start in the MAC including a MAC title re-match win over Akron, the Bulls were rolling. Then came road losses to a respectable Kent and then Ohio of course. And then...a home loss to BALL STATE??? How the heck did that happen?

In many ways the Huskies are looking into a mirror vs. Buffalo

The 6'2 Senior Rodney Pierce is the man that makes things go for the Blue and White. Think of him as a Xavier Silas that takes as many shots (33.4%), but doesn't nearly take as many fouls. Let's take a look at what he's done these past couple games:

It's basically Mike DiNunno was playing SG for them the last few games.

Speaking of MD (am I picking on him too much?) Buffalo has a PG in John Boyer that is the complete opposite of the free shooter. I am simply drooling over his stats. He does everything that you want for somebody playing the point. He has a slightly better assist rate (29.8 to 26.6), but is also ridiculously efficient on the offensive end. His effective FG% (59.5 to 38.2) and true shooting % (63.4 to 39.9) make Mike D look silly. He even has a 48% FT rate. Am I dreaming or have I found the perfect MAC PG? Or is that DJ Cooper? Whatever.

The guy to watch out for in the front court is 6'7" Titus Robinson, who is the 4th best player in the MAC on the offensive boards with a 13.4 OR% and has a knack at getting to the line. 6'2" Calvin Betts is a lot like Jake Anderson in that he grabs a bunch of defensive boards and gets to the FT line.

The Bulls are about as average as you can get for a MAC team. They're good at making FTs (71.8%) and are a relatively good team on the defensive end. They also turn the ball over a lot (233rd in the nation) and have a weak perimeter defense (293rd).

It's gonna be a battle, but I just have to go with my Huskies in this one. After the Ohio loss, Patton must have lit a fire up the players asses to step it up on the defensive end of things. After this game we go on the road of doom to Kent State & Akron, so this is just one game that we can't afford to let go.

Buffalo is about in Ohio's range in pace, but expect the defensive intensity to be picked up in this one. The Huskies will have be aggressive and get to the FT line more if they want this victory.