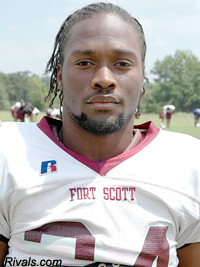 Um, WOW.  For those of you looking for more offensive weapons after the embarrassing International Bowl loss, then you're in for a treat.  Jas Hopkins had to endure a long, winding road to get to where he is now, but he's been successful at every stop:

At East Gaston, Hopkins set the Warriors’ school rushing record in 2006 with 1,901 yards while earning All-Gazette honors and also leading East Gaston to a co-Big South Conference title and a school-record 11 victories.

In 2007, Hopkins rushed for a school-record 1,200 yards at Charlotte Tech before heading to Fort Scott of the Jayhawk Junior College Conference.

Hopkins rushed for 3,158 yards in two seasons, including a national-best 1,931 yards last year to earn National Junior College Athletic Association offensive player of the year honors – or the junior college version of the Heisman Trophy.

"I’m looking forward to the next step in my career," Hopkins said.

"It’s more of a bigger Division I school," said Hopkins, who spent the last two years at Fort Scott (Kansas) Community College and will have two years eligibility at NIU. "They’ll have seven nationally-televised games. They run the ball a lot. Basically, everything fits me except the weather."

"I’m sure I’ll get used to that (weather). I’m just excited about the chance I’m getting," said Hopkins, a 2007 East Gaston High graduate.

"They run a two-back I-formation offense and they tell me I’ll have a chance to compete for the starting job," Hopkins said.

The way his coach talks about him is really exciting:

"I could talk for days about Jas," Fort Scott coach Jeff Sims said. "For him to do what he has done is amazing. He’s become one of the best runners in the history of a conference that’s had NFL guys like Corey Dillon, Brandon Jacobs, Rudi Johnson and Mike Rozier play his position."

"Jas is the single toughest football player I’ve ever been around," Sims said. "He carried it 45 times in his first game this season and he’s never hurt. He’s just a tough, strong, physical, effective runner."

That last sentence sounds like something Coach Novak would have said about Garrett Wolfe back in the day.  And I'd make a comparison between the two players.  Although Hopkins may not have the same quickness or moves that Wolfe had, they both have similar cutting styles and running desire.  Both backs like to run through tackles and refuse to go down.  The dude can stop on a dime and doesn't lack at all in the speed department.

I'm surprised that his only other offers were from Sun Belt also-rans Arkansas State & UL-Lafayette.  It could have been about size, could have been about grades but it really doesn't matter. Hopkins is a FOOTBALL PLAYER that won the highest possible achievement that he could garner in the Junior College ranks.  Coach Kill knows the Kansas JC system like the back of his hand and it seems like our bowl appearances these past couple years is starting to make a huge impact.

He'll enroll early, which counts him against last year's class and gives him a better chance at making an impact next year as a Junior.

Unbelievable pickup, see you in the Spring.  Let's keep this gravy train rolling through this weekend and next.