Linemen Recruitin' Weekend brought to you by Trevor Olson's mustache

Share All sharing options for: Linemen Recruitin' Weekend brought to you by Trevor Olson's mustache

Today is one of the bigger days of the recruiting season. While we don't have the entire list of recruits visiting this weekend, the select few that have been announced are some pretty big head-turners. It's time to boost both sides of the line up after losing players like Doug Free (Cowboys) and Larry English (Chargers) to the NFL. OK, Free's last season for the Huskies was 2006, but the line just hasn't been as dominant since!

First up is OT Audoniss Madison (6'5" 300 lbs) out of Edna Carr in New Orleans, LA. He is a 2-star prospect on Rivals, which should be higher because he has offers both Virginia and Arizona. Hopefully, he made it through all the weather and landed in Chicago safely today. We're the first official visit of 4 that he has set up. Half the battle is just getting them here and the fact that we're his first visit is a good sign.

OT Fabbian Ebelle (6'8" 295 lbs) is a local guy from Simeon of the Chicago Public League, so he'll be used to this winter weather. Ebelle is a fast riser in the recruiting circles. His original offer was from Eastern Michigan, but both Illinois and NIU have jumped on the boat as well. Again, we are his first official visit this month. We could really use somebody with his size and Rivals ranks him as a 3-star prospect.

The biggest surprise visitor is Morris DE Kevin Henry (6'5" 255 lbs), who originally committed to Central Michigan before Butch Jones went bye-bye to take the head coaching job at Cincinnati. He is a 3-star prospect that is ranked the #19 player in IL and the #38 strongside defensive end by Rivals. Essentially, he's the only in-state prospect that we have offered that originally decided to go to another MAC school. This weekend we get a chance to show him the light.

So if you see these huge guys walking around on campus the next couple days, make sure they feel at home.

As for Trevor Olson's International Bowl stache...what do you think? 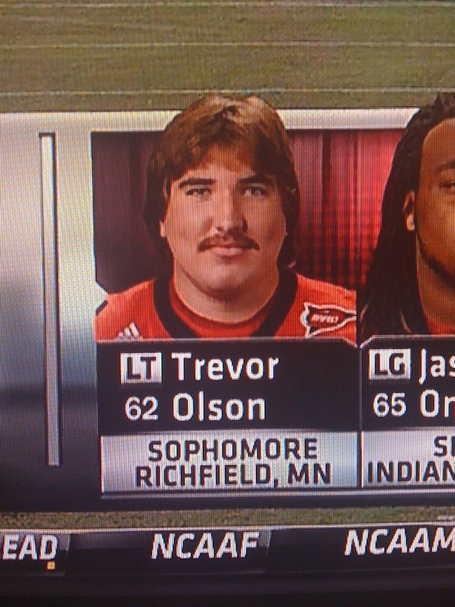