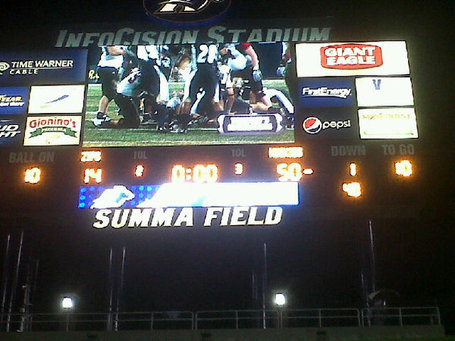 The Northern Illinois Huskies had 520 yds of offense against the Akron Zips.  Chandler Harnish was majestic in running the offense early on in the game and he finished with one of the best games of his career, finishing with 281 yds and 3 TDs.  The receivers caught everything that was thrown to them.  All four of our running backs averaged over 5.3 yds per carry.

Tommy Davis fumbling the punt return.  Not scoring a touchdown on the first 3 drives of the game.  The defense giving up a big run at the beginning of the 2nd half.  But really, we're grasping straws here.

The terrible product that is All-MACcess.  The fact that no NIU fan could watch this game is a tragedy in this day and age.  I was watching FCS schools play on near-HD quality video today.  Early on it would just time out and turn to a blank screen and then we got a 'please stand by' message but nothing ever got fixed.  I had to huddle to my radio stream and listen to Bill Baker exactly like I did in our first matchup against Akron five years ago.

To be 3-2 after playing 4 out of 5 games on the road is a really good thing.  Now we have the next three games at home highlighted by next week's matchup against Temple, the MAC East favorite.

What are your thoughts on the game?