Share All sharing options for: A Key to beating Toledo: QB Pressure

New QB Terrance Owens will be starting for Toledo, and while he may be talented, he doesn't quite have the in-game experience yet.  NIU wasn't able to get to the quarterback too many times against WMU, but they did start to do a few more timed blitzes here and there in the second half to get to Alex Carder and throw him off of his rhythm.  Here, we'll break down the final play of the game where Demetrius Stone put pressure on Carder and Jake Coffman intercepted the ball.  This wouldn't have been possible without the amazing powers that be running godawgz.com. There wouldn't be any highlights on there if it weren't for the magic of DVR or digital transfer to an online database of highlight videos. 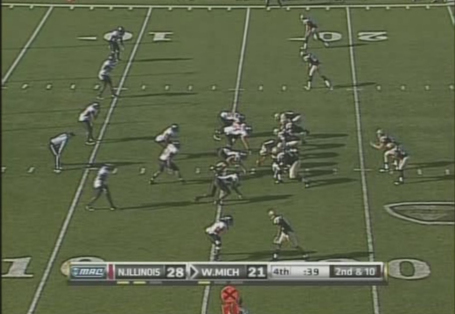 On 2nd and 10, the Huskies start off in sort of a nickel 4-2-5 type of defense, but note how Demetrius Stone is creeping up towards the two other linebackers at the start of this play. 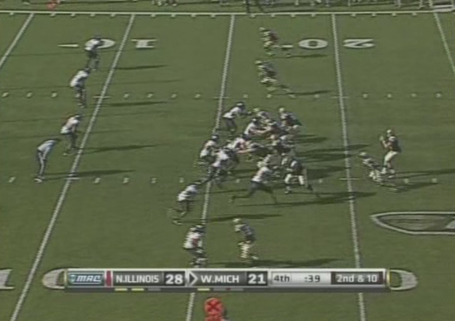 The ball is hiked and you can see that both Alex Kube and Stone are blitzing, while Tyrone Clark is just reading and playing zone on the play by the defensive line. 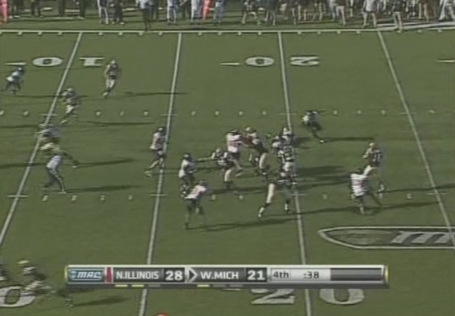 Carder is completely focused on his receivers at this point.  The running back picks up Kube in the backfield, so there is no extra blocker for the incoming Stone.  Instead of blitzing, both defensive ends in Stephen O'Neal and Jake Coffman drop back in pass coverage. 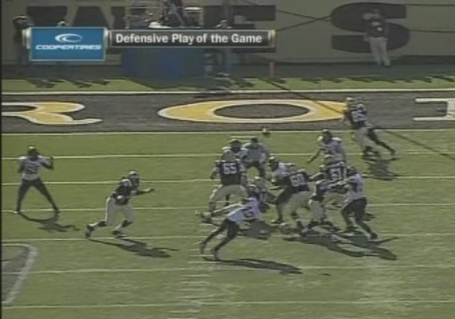 The result: Stone blindsides Carder into throwing a duck that Jake Coffman would intercept and seal the victory for the Huskies.