Northern Illinois and Jerry Kill had offered Womble the week before the MACC when everything went completely haywire around these parts.  After Kill left for Minnesota, all of a sudden Womble had an offer from the Gophers.  Immediately I just pretty much assumed that the highly-touted recruit was heading there, so this commitment really took me by surprise.

Womble has been all over the place.  He was a very highly sought running back out of high school in Arizona and eventually chose to go to North Carolina over a multitude of other BCS offers.  USC was even interested just a few days ago.

Womble redshirted his first season at UNC.  As a redshirt freshman, he ran for 41 yds on 6 carries before breaking his wrist halfway through the season.  Due to academic issues, Womble transferred out of UNC following his rFR season (2009).  He transferred to Hutchinson CC where Tom Matukewicz apparently recruited him to play for the Huskies and the rest is history.  Womble played 9 games this past season and rushed for 712 yds and 8 TDs on 126 carries (5.7 ypc, 79.1 ypg) for the Blue Dragons.

Womble will have an opportunity to start right away in the NIU offense with Chad Spann graduating.  He will graduate in December and be ready for spring practice.  This is arguably the biggest recruit that NIU has ever landed.  I don't know what kept this guy on with the program, but I think we can all thank Coach Tuke, Dave Doeren and the H-Bowl victory for this one. 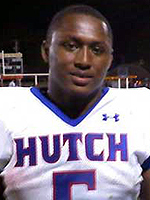