Anytime I can incorporate Bowie onto this blog, I will

Hey guys, you hear the spring roster was released? Me neither.

There were a few notable position changes on there, but none bigger than the switch from defensive tackle to tight end for Adam Coleman.

Why is this such a momentous change? The fact that Coleman is a VERY talented player. He was ranked the #8 player in Iowa and received scholarship offers from Stanford and Duke as part of Kill's inaugural 2008 recruiting class. He even played as a true freshman and has participated in 16 games the past two years. With zero players graduating and the addition to Mike Krause to the middle has provided Coleman with the ability to move to a different position. 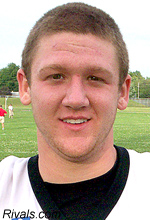 Don't the innocent smile fool you. This Iowa native will crush you.

His competition at TE is pretty light as Jason Schepler was the only player seeing much time at that position when he wasn't hurt. And the fact that Reed "Hands" Cunningham graduated and Bryan Beckner left the program. We tend to use 2 tight ends a bunch anyways, so he is pretty much guaranteed a bunch of playing time. But can he catch the ball? That remains to be seen. As long as he's pile-driving defensive ends into the ground, it won't even matter.

John Hopkins, who flirted with tight end during spring practice, seems to be making the transition back to the DL. It sure would be nice to see him on the field one of these years. Also, former walk-on Jon Phillips will be shifting from the D-Line to the O-Line.

This got me thinking about some other position changes that the Huskies can make.

Sure, the QB situation is pretty much in flux right now with Harnish's knee not healing correctly, but Grady doesn't seem like he would be the one to step up and take the starting job. Sure he's a winner, but his ability behind center is limited and could provide a spark at other positions on the offensive end.

Think William "The Refrigerator" Perry on the goal line. Jason Onyebuagu helped out as an extra fullback a couple times this past season, but I just want to see Pirkle get a chance back there. At 6'0" 285 lbs he can get under the pads of any defensive player.

Have you seen his highlight video? Since it seems like we're heading in to QBAPOCALYPSE territory again, Barnas might be the X factor in the race. Remember that he originally committed to play for Syracuse as the signal caller before they dropped his offer.