The Daily Diesel will Kill your bowl game

Share All sharing options for: The Daily Diesel will Kill your bowl game

The Northern Illinois official site is chock full of WIN.  Have you been to NIUHuskies.com lately?  The marketing team sporadically awakes from its slumber and this time they even got the EDSBS treatment: 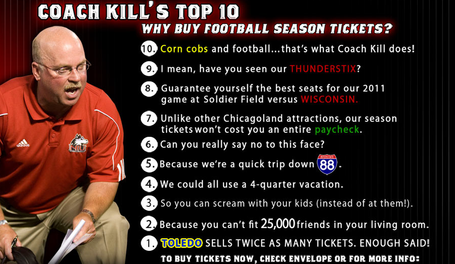 Corn cobs and football is a take off of Wedding Crashers (isn't picking on Maryland past its time?)  By the way, have you seen my thunderstick?  This opening page has everything: crude photoshops, Chandler Harnish's underwater rehab and truth to longstanding rumors.  I love it when Toledo fans think that we are "trying so hard to become rivals."  The fact is that we hate you.  We know you injured Harnish on purpose.  You can hate us back or just touch butts with BUGS all day.  We don't care.

The bigwigs get a giant A for effort on this one.  As for execution...sure why not.  It has people talking, doesn't it?  Hello to the beginning of a cult internet following.

When it rains is pours.  Have you been to HuskieWire.com lately?  It's been a rough couple days for NIU athletics.  No telling what our stock would be at if NIU was a publicly traded company. 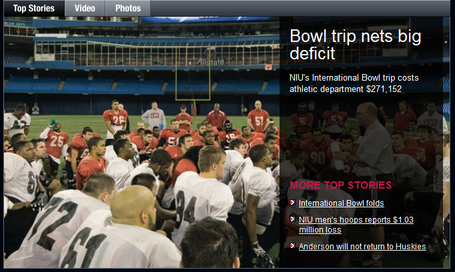 BOWL KILLAZ!!!  The International Bowl is no more to the surprise of nobody.  Honestly, what screams college football more than two lower-tier teams playing in a half-empty indoors stadium in a Toronto in the middle of winter?  This bowl might have survived if the Big East team chosen was actually anywhere close to the Rogers Centre.  Or if fans didn't need to shell out extra $$$ to get an expedited passport in time to actually see the game.  2 out of the 4 bowl games NIU has played in this past decade have folded the year after.  2004 Silicon Valley Bowl Champs FTW (see right sidebar).

Big East teams will now send a team to the new bowl game in the Bronx.  MAC teams?  Sent to a Siberian prison to get eaten by mountain lions in the dead of winter.  Oh, I mean they get to play in the Humanitarian Bowl in Boise, ID.

The path to destruction.  Sahly breaks down the bowl revenues and expenses and it's not pretty.

That's not much of a payout and the reasons for low attendance ranged from not having passports to already having plans for New Year's.  Reasons not listed in the article: The insanity of going somewhere that is actually colder than Dekalb in January and the fact that we barely slipped into yet another obscure bowl game when we probably didn't even deserve one.  Overall, it was a no frills trip to Toronto.  Get in, get out.  Here's just one example of how we saved money, Office Space style:

The team also didn’t stay the night of Jan. 2 in Toronto and instead flew back home the day of the game. Instead of renting a copy machine or being charged a fixed amount per copy it made in Toronto, NIU bought a copy machine and brought it back to DeKalb, which Compher said actually saved money.

We actually have video footage of three members of the football team taking out some anger on this copy machine after the game:

This is news?  CNN reports that our basketball program lost a ton of money this year.  Compher confirms it.  We have a very good accounting program and all the other schools on that list have their numbers fudged by white collar criminals.  I'm using hyperbole, but our basketball program is terrible and has been terrible for years.  No surprise here.

And then there were three.  QB Jordan Lynch had to get stitches in his hand to repair a cut and will be out 8-10 days of spring practice.

Tommy Coughlin gets one step closer to the starting position.