Limegrover and the third down conundrum

Share All sharing options for: Limegrover and the third down conundrum

Something just wasn't right with NIU's offense last year.  It wasn't just one person that was under-performing, rather frustratingly we couldn't exactly put a finger on what needed to be fixed.  Some blame Harnish.  Some blame the offensive line or the inexperienced receivers.  The majority of the fans blame the coaching.  Most of the boos go directly to Coach Kill, but just how much is he responsible for the offensive playcalling?  Offensive Coordinator Matt Limegrover also shares what would seem to be the majority of these decisions.  But when these offensive decisions are singled out, who is to blame?  Who decided to run it up the gut twice and then face a 3rd and long with little or no hope of converting?

Kill Grover? Kill with a dash of Lime?

I doubt we'll ever know, Limegrover gives a little insight on what the offense is focusing on this offseason:

"One of the things we struggled with the most is third down conversions, especially third-and-medium and third-and-long," offensive coordinator Matt Limegrover said. "We're changing our philosophy a little bit on that."

So, starting with the second week of spring practices, NIU will begin to implement what they're calling second-down scrimmages at practice. The offense will start with the ball at second-and-8. If that group gets a first down, the next one enters. If it doesn't, that's when NIU's coaches hope the team can get better at third downs.

"I can yell 'third-and-6' all I want, but to a kid it's just another rep," Limegrover said. "But if there's something that they know on the line here it's second-and-8, what are we going to do for the next two plays? It makes a little bit of a difference."

Hmmm. This sounds familiar to what Kill was saying the other day:

Fine.  You've laid it out there that you want to focus on converting 3rd downs.  But wait, weren't we actually pretty decent at that last year? 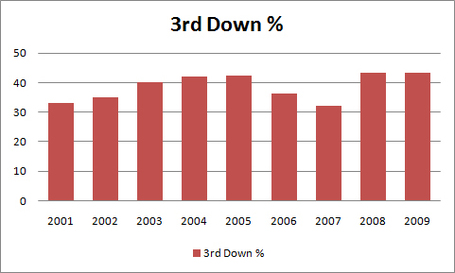 Huh.  The 3rd down % the last two years was actually the best that NIU has converted in the past 9 years!

I really don't think that an offense should be measured on how well they convert 3rd downs.  For example, shouldn't an offense be avoiding these mid-to long range 3rd downs if we're good enough on 1st and 2nd downs?

Here is NIU's 3rd down % (multiplied by 10) compared to offensive ypg: 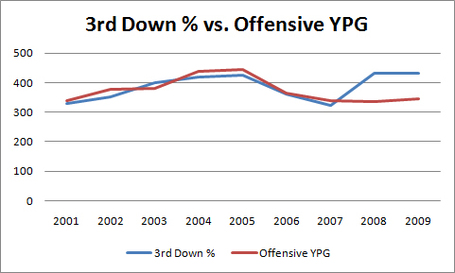 The results are pretty insane.  The trend this past decade has been that the offense rises and falls with the 3rd down conversion.  However, in Kill's first two years here he has shed this trend and converted 3rd downs at a rate much higher than the offensive production.

3rd down conversions don't seem to matter in the grand scheme of things.  I like to place conversion rate of the 10-win 2003 team (exactly 40%) as the point you want to be above.  Why?  Because it's a nice even number and as close as the 2009 median for 3rd Down %'s as you can get (which is actually Michigan's 39.76%).  National Champion Alabama was two spots lower than Big Blue with 39.18%.

So no Matt, 3rd down conversions was not "one of the things we struggled with the most".  It's time to get more creative and simply better on O to make these 3rd downs more manageable, especially in the midrange when we need a pass completed down field to keep the drive going.  Or just don't get to that down.  In 2005, NIU only had 153 third downs to convert compared to 176 this past season. 2003's team had to convert 185 times.  Go figure.

As for the defense, yeah they need a lot of work on 3rd down, so keep it coming.