5 Takes from the "Spring Game"

Share All sharing options for: 5 Takes from the "Spring Game"

Call it what you may, the final practice and scrimmage for the Huskies took place this past Saturday.  It was just the basic offense vs. defense that we've been doing all spring long.  Next year might be different though:

"A year from now, we'll have more kids, freshmen and things like that, probably a year from now we'll get into a deal where we maybe divide the staff up and have a true [game]," Kill said. "We just don't have the depth at this point in time. But a year from now, we will. It'll be the first time since I've been here."

There were many things to take away from this game, but we'll start with a couple things about the Quarterbacks  since it seems like they are a lightning rod of debate right now...

The starter under center won't be decided until Sep. 2nd vs. Iowa State

Chandler Harnish remains static in his on-again, off-again drama with his knee.  He was 9 of 16 for 161 yds, 2 TDs and an INT for the scrimmage.  Not to mention he ran the ball 3 times for 24 yds.  Jordan Lynch was 6 of 11 for 58 yds and a rushing TD.  A.J. Hill only played for the first seven practices because of an unknown injury and Lynch himself missed some time earlier in the spring, but bounced back to solidify a spot right there behind Harnish.  Every quarterback on this roster will be sweating it out this summer according to Coach Kill:

"They've all got work to do this [summer]. [DeMarcus] Grady had a great spring. He really did," Kill said. "But it all comes down to what they do. We need to find, and we'll find it, is what are they going to do this summer. How hard they'll work.

DeMarcus Grady is NOT a starting QB

Case in point his first four passes of the Spring Game.  His first pass was picked off by safety Garrett Barnas.  His second pass was tipped by Brian Lawson and then intercepted by Jordan Delegal.  His next two passes are tipped and overall for the scrimmage he was 4 for 12 with the majority of those yards coming on a 60-yard TD to Anthony Johnson.  Yes, Grady's career in 30 minutes.  From what myself and others have seen from DeMarcus this spring, he just still can't consistently make the throws that a starting quarterback should make.  What we have here is an extremely good backup that can come in at any point in a game and provide a spark, but he won't be able to sustain the full-time job over the long run.  Switch him to slot, line him up in the backfield, just don't have him sit back in the pocket because he doesn't belong there.

rFR Anthony Johnson took a DeMarcus Grady pass 60 yds for a TD.  Soon after that Harnish found Perez Ashford for a 61-yarder for a score.  These couple plays show you how much the playbook is being opened up and how much the Huskies are working on those long conversion plays.  No matter who the hell they want to put in at QB. 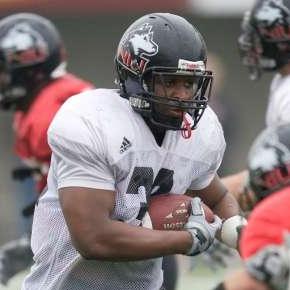 No running back had too flashy of stats in this game and there are several reasons for this.  First of all, Chad Spann (shoulder injury) sat out, as did Ricky Crider.  Both of them are seniors and we know what they bring to the table.  The offensive line's depth is extremely shallow and they're going up against arguably the best and deepest position on the team in the defensive line.  6'2" 242 lb Cameron Bell's 9 rushes for 46 yds included dragging NIU defenders left and right.  Jasmin Hopkins only had 7 rushes for 16 yds, but he also took a screen pass 52 yds for a TD.

Defense continues to be the anchor

Love seeing the defensive guys get their hands on the ball (3 INTs, 10 PBUs) and get to the QB (7 sacks).  Jordan Delegal had 2 INTs an a PBU all to his lonesome.  Nice to see Darnell Bolding get 5 tackles and 2 sacks.  Both Devon Butler and Daniel Green had 6 tackles and a sack apiece.  In case you were wondering, Green is a rFR walk-on DE.

Coach Kill's final statement from the spring pretty much sums up what's going to happen with this team throughout the summer: