If you want to get pumped up for the day, just check out this press conference.  Bennett seems to have it all: the experience, the intensity and the plan to turn this women's basketball program around.  Let's breakdown her story and what she brings to the table for the Huskies:

Let's take a look at the experience (Official Release):

Bennett brings 17 years of experience as a collegiate head coach at Marycrest College (1988-89), Wisconsin-Oshkosh (1989-96), Evansville (1996-2000) and Indiana (2000-05). Her career record of 296-177 includes 12 winning campaigns and nine postseason appearances. Under Bennett's direction, UW-Oshkosh won the 1996 NCAA Division III National Championship with a perfect 31-0 record after playing in the national title game the previous season. She was named Wisconsin Intercollegiate Athletic Conference Coach of the Year five times and was the Women's Basketball Coaches' Association Division III Coach of the Year in 1996.

Despite having struggled her first two years at Evansville (3-23, 6-20), she hugely rebounded with two straight postseason appearances with the Purples Aces (19-11, 23-7).  It just goes to show you how fast she can turn a mid-major program around.

Coaching runs through her veins:

She's excited to be here:

"I feel like this is the opportunity of a lifetime for me," Kathi Bennett said. "It is rare to encounter an opportunity where everything is perfect - the timing, the situation, the people. I feel like that with this head coaching job at Northern Illinois."

Why she took a break from being a head coach:

Bennett also was in a near-fatal car accident while head coaching at Indiana in 2002 that resulted in a broken neck. She was back at practice a week and a half later and the Hoosiers won the Big Ten tournament that year as a five-seed and beat two top-10 teams. Bennett resigned in 2005, saying at the time that the accident was a factor and left coaching until going to Wisconsin.

As an assistant at Wisconsin, she brought the Badgers up from 10th to first in the conference in terms of scoring defense, leading to an NCAA appearance this past season.

You'll read a lot about Bennett's coaching style and Bennett-ball (a "pack line" defense that will clog the middle and a motion offense) in the coming days, weeks and months. For now, here's a Bennett quote on her belief in the system.

"The style of play has proven itself over and over," she said. "You've got to be crazy not to believe in it. It works. It's proven."

Somebody START BOARDING UP THE CONVO WALLS 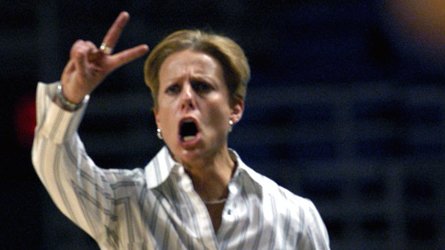