Why only two preseason magazines are worth buying

Share All sharing options for: Why only two preseason magazines are worth buying

Especially if you're a MAC fan.

I'm a bit of a fanatic when it comes to these preseason college football magazines.  I've been reading them ever since I started following college football religiously in high school.  So excuse me if I'm a bit of a snob, but these suckers are expensive and with so many options, how do you really know you are getting your money's worth?

The first thing that you can look at is preseason.stassen.com which takes each publication's predictions and measures how well they fared at the end of the last ten seasons.  The following are the most accurate: 1. Phil Steele 2. Athlon 3. Sporting News 4. Lindy's.

Athlon has always been a mainstream leader in terms of season previews.  Phil Steele started off a bit underground, but has gained deserved publicity and notoriety these past few years.  His 300+ page mag also known as "The Bible of College Football Previews".  After that, there's a bit of a dropoff.

Steele's mag will be released this upcoming Tuesday, but I got my grubby little hands on the other options early.

Let's take a look at this year's version of Sporting News: 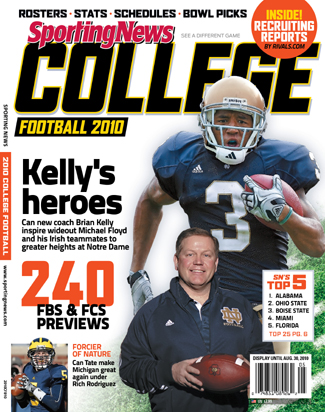 First of all, SN's physical magazine doesn't rank 120 teams.  It has a top-25 and then they say how well each team will do in their respective conferences.  How much fun is that...wait what?  They released their top 100 online?  They could have done all 120, but those 20 extra teams are too much to handle?  And why couldn't they include their rankings in their preseason mag?  It doesn't make any sense.

So anyways, looking at the rankings...HOLY CRAP WE'RE #49 IN THE NATION!!!

I can't begin to explain what utter insanity this is.  Tyler Sheehan, who threw for 10,117 yds and 70 TDs in his career, gone.  Freddie Barnes who set the NCAA receptions record last year and accumulated 298 catches over his career, gone.

Desperate for some explanation, I opened up the magazine and was immensely disappointed.  There was barely 1/3rd of a page of talk about how the team was so inexperienced, blah, blah.  Cut to scene in Sporting News editorial room throwing darts a dart board.  Even Orange from FalconBlog itself thinks this ranking is too high.

Dear Sporting News, thank you for rating us so highly but with this Bowling Green fiasco I have now feel less optimistic about NIU in 2010.  Not to mention, you have given some of us too much sugar in our red kool-aid.  I now have diabetes.  Thanks.  P.S. I have no idea how you guys are still in business.

More reasonable rankings for Bowling Green: 111th by Athlon, 96th by College Gridiron 360.  Hell even Lindy's knows what's up putting the Falcons at #100.

On to Lindy's, my favorite punching bag of them all: 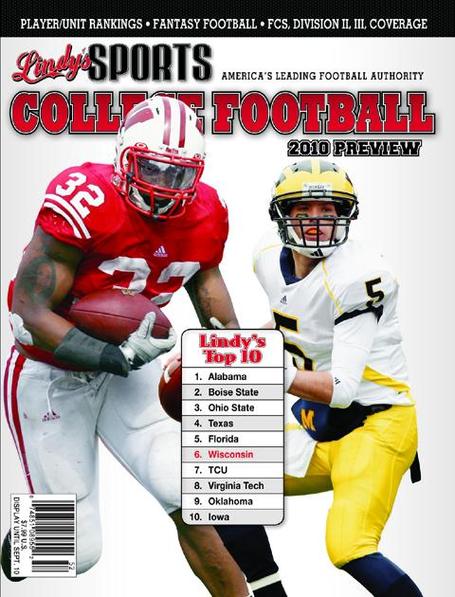 Think of the laziest thing you could do in terms of preseason rankings and do it.  Central Michigan won the MAC last year, so they should win in 2010 right?  Lindy's thinks so, ranking CMU 69th in the nation, ahead of #72 Temple and #93 Northern Illinois.

No more Dan LeFevour (6th round, Chicago Bears).  He was only responsible for 15,853 yds of total offense (2nd most ever) and 150 total TDs (NCAA All-time leader) over the course of his career.  No more Antonio Brown (6th round, Pittsburgh Steelers).  He only had 350 receptions (2nd in MAC history) for 22 TDs and 3,199 yds in his career.  Didn't even mention WR Bryan Anderson (3rd in MAC history in receptions, 4th in receiving yds), or RB Bryan Schroeder (ran for 128 yds and 2 TDs vs NIU).  All gone.  As is their entire defensive secondary.

Oh and did you hear CMU has a new coach as well?  Geez.

But here's the kicker...

Lindy's named Chandler Harnish 1st Team All-MAC and "Most Accurate Passer" in the MAC.  That's pretty good for a player that may not keep his starting job after this summer. 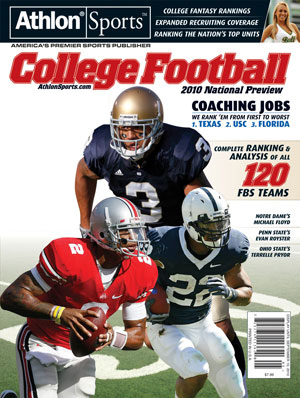 You want some reasonable rankings, look no further than Athlon: