What a way to start things off!

"It’s a great program," McIntosh said. "I love the coaches and I like the kids. (NIU coach Jerry Kill) is a great guy. He is one of the main reasons I went there."

His older brother Paul McIntosh is currently a sophomore at Southern Illinois, who led the Salukis to the FCS quarterfinals last year.  Senior RB Ricky Crider is a fellow Reitz alum as well.

You asked for a quarterback and the Huskies delivered with the first commitment for the 2011 class this offseason.  He fits the mold of QBs that Kill likes to recruit in both in ability to run the ball and in size.  He runs a 4.7 40 and has a 37" vertical jump.  Those numbers are ridiculous for a quarterback, but you can see what he is capable of on the ground in his highlight video.

We seem to LOVE quarterbacks that are 6'2" and under for some reason. Say what you want about how he doesn't have any other FBS offers, McIntosh is a solid football player and already a proven winner and leader for his team.  It's probably just a size/system thing.  Not to mention it's still very early in the recruiting process. 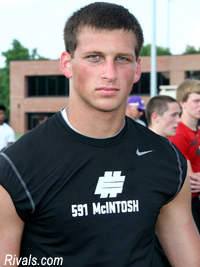 Huskie fans, sound off on your thoughts on the first commitment!