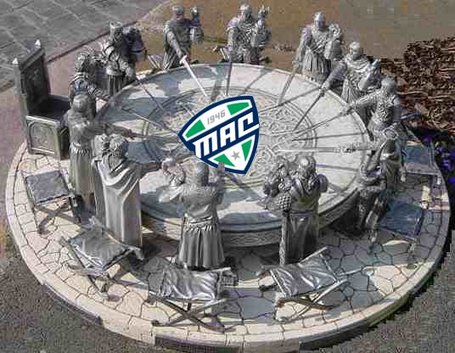 This week's shoot-around is hosted by the brand spankin' new Eastern Michigan Eagles blog.  I'd make an insult here, but it takes such valence to write about a winless team.  Begin.

1. For the season, excluding intraconference matches, MAC teams are 0-10 against Football Bowl Subdivision opponents. Which MAC team will be the first to record an out-of-conference win against any FBS team?

2. Three teams -- Akron, EMU, and Bowling Green -- remain winless; when will each team record a win? Temple is undefeated; when will they take their first loss?

Akron will win in their last game against Buffalo on a last second hail mary and then the city of Akron will riot.  EMU won't win another game (sorry!) and BUGS wins this weekend vs. Marshall (see above.)  Temple will fall this weekend vs. UConn.

3. Although teams have only played two games, that is nearly 17% of the season. How has your team's performance so far compared to your preseason expectations? What key factors will you be watching over the next two weeks?

NIU has fallen completely short of expectations.  Everything that could have gone wrong has and we do not look like a team that is ready to win the MAC West.  However, there are still two non-conference games left against beatable opponents (Illinois and Minnesota) and then a scrimmage against the Akron Zips to get us ready for the conference season.

Key factors: Finding any sort of identity on the offensive side of things.  Like try throwing a pass downfield maybe once or twice ever.  Please!  Oh and developing some sort of special teams unit.  That's about it.

4. This Saturday, Central Michigan visits EMU. The last time they played in Ypsilanti (2008), a school-record 26,188 fans turned out to see the teams run 174 plays, combining for 1,171 total yards of offense, 15 touchdowns, and 108 points. How many people will show up at Rynearson Stadium this Saturday, and how many yards of offense and points scored will they see?