Share All sharing options for: A guide to NIU's defensive personnel changes

The line still hasn't been released for the Toledo game. I expect the Rockets to be at least 6 point favorites in this game. If they were playing the same defense that started the season I would told you that the Huskies had no chance beating the Toledo Rockets. I'm not going to put a whole lot of stock in to the Huskies taking this one, considering it is on the road against the best team in the division. However, we can all hope and dream that this truly is the year that the Huskies take home the MAC Championship. The Huskies probably got all their bugs out of their system last week against Buffalo. Toledo is by far the most important game of the season and I believe that this defense can make a stop or two and let the Huskie offense take over the Glass Bowl on tuesday.

This is a whole new defense. It is nothing like the defense at the beginning of the season, painfully giving up over 40+ points to Kansas, Wisconsin and Central Michigan. This is a new defense with swagger to defeat a really bad offense in Kent State to 10 points, a favorite in Western Michigan to 22 and Buffalo before the Huskies almost gave away the game.

Here is NIU's current lineup on defense, vastly different than the beginning of the season: 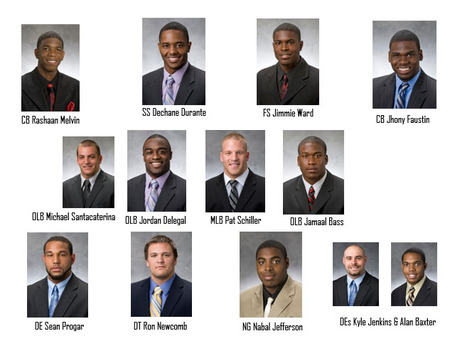 As you can see, Dave Doeren is taking some time to get to know his strengths and weaknesses of his players week-in and week-out. The competition has risen and no spot on the team is safe to being taken by an up-and-coming player. Let's break down the changes at every single position:

DEs Joe Windsor, Alan Baxter and now Kyle Jenkins on the other side.

There could be more stability on one side of the defensive line, but Ron Newcomb and Sean Progar have really stepped it up in the last few games.

Not too much has changed except for the addition of 'Santa' on 3rd downs and nickel packages. While Bass is improving and Delegal makes the occasional play, this is an excellent addition to the linebacking corps.

The secondary couldn't be any different. Jhony Faustin started the tidal wave at CB, pushing Dominique Ware to nickelback duty. Jimmie Ward and Dechane Durante were excellent replacements to spell the underwhelming Tommy Davis & Demetrius Stone. Now we have some real safeties making tackles all over the place.

Can the Huskies stop Toledo on Tuesday or is all this moving around of personnel just for naught?