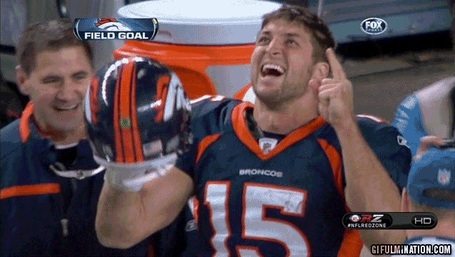 After leading the Broncos to their sixth straight victory over the Chicago Bears, Tim Tebow was so ecstatic about his victory he decided to show his homage to NIU quarterback Chandler Harnish by pointing up to the sky and Harnishing. HIs form isn't that great (his finger should be pointing higher in the air) but you can tell that this is a clear tribute to Harnish.

Poor Bears... at least you had the Northern Illinois Huskies to root for this year. Those mobile QBs have to watch after each other, you know?