I'm calling this offseason a mini-end of times as an NIU fan, because there is absolutely nothing to talk about until spring practice starts up March 22nd.  But wait, am I actually going to start talking about basketball for the next couple weeks?  Why yes, I am!  Does NIU have any chance to win the MAC tourney?  There's really not too much to say, but it will be fun to chronicle how bad this team has become.

Where was I?  Oh yeah, we signed a kicker out of Bakersfield Community College (CA)

Going in to signing day, the Huskies were pretty confident in the fact they had Taylor Zalewski signed and sealed until a last-minute decision to walk-on with the Fighting Illini. After that shocker, the NIU coaching staff panicked and offered a scholarship to a kicker at the exact same time he was sending in his LOI to Tennessee Tech.  Sorry dude.

After that, looking at NIU's depth chart at kicker was an exercise in faith something would happen: 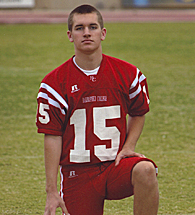 Only Sims is a scholarship and he couldn't even beat out the polish prince last year.  He was 17 of 27 on FGs and 55 of 61 on XPs.  How far down was finding a kicker on Kill's list of things to do last offseason (getting paid was probably goal #1)

So what do we know about Josh?

His FG expertise record? 29 of 34.  Definitely an improvement.

His range: He kicked two-46 yard field goals in one game!

Credit recruiting coordinator Ryan Nielsen, who may have found this guy through his strong California roots.

In the meantime, you can relax that we finally have a serviceable kicker on our roster.