NIU seniors step it up on their night (sans Xavier Silas)

Share All sharing options for: NIU seniors step it up on their night (sans Xavier Silas)

The last time I wrote about this team, I thought that the win @ Toledo would be their final hurrah, but I thought wrong. Now, with Xavier Silas hobbled by his ankle injury the Huskies came away with one of their top performances of the season to go out on a high note.

It truly was the best defensive effort of the season (we finally see this effort now?) Or it might have been just due to the fact that EMU has the worst offense in the conference (SHHHHH). Anyways, this game got out of hand quick.

As you can see, NIU wasn't that great on offense (but EMU shot 26.9%) and the Huskies turned the ball over 20 times. What made this game was the tough, gritty way that NIU played grabbing 44 rebounds to EMU's 25 and the fact the Huskies made 26 of 33 free throws.

Senior guard Jeremy Landers made the best of his night and scored 17 points and grabbed 6 boards. Antone Christian dropped in 13, while Tim Toler had 12 and 6 rebounds. Tony Nixon grabbed 7 balls off the shot himself. 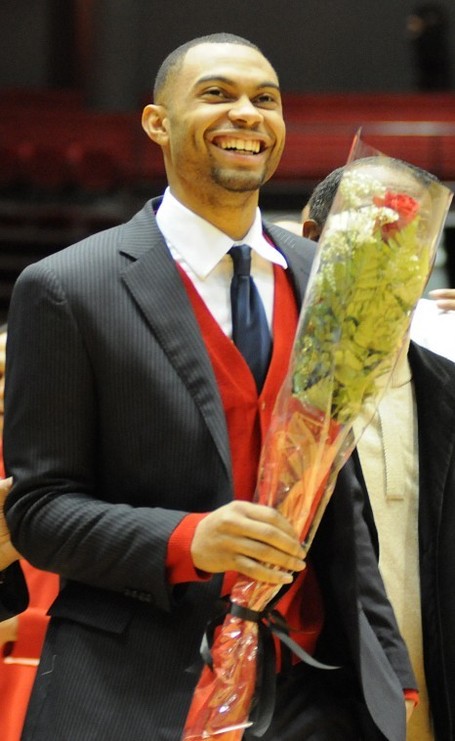 (via Jerry Burnes of the Northern Star)

Aside from Landers, Michael Patton and Xavier Silas were the other two seniors who were honored before the game. Congrats to all of those players who poured their heart and soul into the game for the past few years.

PLAY THE MARCH TO THE CHAMPIONSHIP GAME AND YOU COULD WIN A TRIP FOR TWO TO LAS VEGAS! LOOK FOR THE CODE INSIDE SPECIALLY-MARKED PACKAGES 12-PACKS OF BUD LIGHT ENTER CODE AT FACEBOOOK.COM/BUDLIGHT

----- No Purchase Necessary. Open to U.S. residents (except CA & TX) 21+. For a chance to win a Grand or First Prize, Game Period 1 begins 3PM CST on 2/14 & ends 3PM CDT on 3/18. For a chance to win a First Prize only, Game Period 2 begins 3:00:01PM CDT on 3/18 & ends 3PM CDT on 4/30. To participate, obtain a Code from inside specially-marked packages of Bud Light beer or to request a Code without purchase, visit budlight.com/freecode during a Game Period. Limit one (1) free Code request/day/person or email address. To play, text HOOPS to BEERS (23377) & follow prompts or visit budlight.com/freecode & follow instructions. See Official Rules inside package or at budlight.com/freecode for complete details. Void in CA, TX & where prohibited. Enjoy Responsibly – ©2011 Anheuser-Busch, Inc., Bud Light® Beer, St. Louis, MO