Share All sharing options for: NIU Basketball: Nader eligible for 2011, Mader commits for 2012

It's been quite the offseason for Mark Montgomery's Northern Illinois Huskies in terms of excitement coming to the court in the very near future.

It was in question for a little bit whether the star of NIU's 2011 recruiting class Abel Nader was going to be able to qualify for the Huskies for this upcoming season, but the Niles North grad is 100% joining the team this fall.

Grades are what kept a lot of schools away from Nader, but Montgomery kept his recruitment going of the Top-10 player in Illinois. (Fellow recruit Dre Henley is 18th on the list). Nader is 6'7" 195 lbs and averaged 23.8 points/8.6 rebounds over his senior year.

Here are a few choice quotes from the article:

"(Nader) is a talented offensive playmaker, who has the ability to play multiple positions and has unlimited shooting range," Montgomery said. "Abdel is an exceptionally versatile player who had the ability to score in a variety of ways. He can score off the dribble, catch-and-shoot and can score both inside an outside."

"(The rise of mid-majors) definitely appeals to me," Nader said. "Also, my main goal is to play in the NBA someday and my mentality is that if I’m good enough, they’ll sign me. They don’t care what college you go to."

After the jump we'll talk about yet another big man for the future. 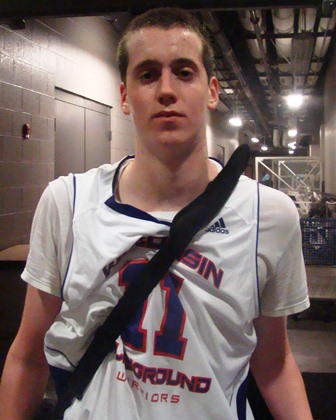 Next up is the commitment of Sam Mader (6'8" 200) out of Appleton East HS in Wisconsin. While Nader might be able to play the wing, Mader is a certified PF.

"I felt good about it,’’ said Mader. "I felt like I could have gone somewhere where I was not wanted as much. But they told me I was their top recruit and I felt I belonged there.

I don't know too much about this recruit at the moment, but he did have scholarship offers from some good mid-major schools in UW-Green Bay, UW-Milwaukee, Drake & Ball State. We've been burned by those schools many a times before, so this is a nice get.

"The coaching staff really did it for me," said Mader, who averaged 9.7 points last season. "They were great guys and extremely nice."