Risk taking on defense: How much do turnovers matter for NIU?

Share All sharing options for: Risk taking on defense: How much do turnovers matter for NIU?

First we talked about how the Northern Illinois offense needs to step it up in 2011, now let's talk about the defense.

In order to win the game of football, you have to score more points than your opponent. Excuse me for being John Madden for a moment, but there is no way you are going to put the ball into the endzone if you don't have possession of the ball. Especially in lower leagues, like the MAC, controlling the turnover battle is absolutely essential in determining how successful a team is going to be over the course of the season. 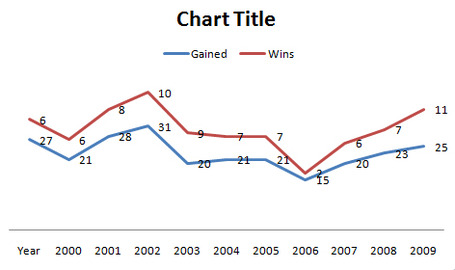 I've tracked just how important gaining turnovers has been for the Huskies over the past decade or so. Look at just how much gaining turnovers positively affects a team like the Huskies. While the 2003 team stands glorious even today, without those 31! turnovers, could they really have pulled those upsets over Maryland and Alabama? When making comparisons between the 2003 team and the 2010 team information like this chart is essential.

The good thing the Huskies have going for them going into 2011 is the fact that the turnovers caused by last year's team were spread around pretty evenly. The leaders in interceptions (Tyrone Clark, 4 & Chris Smith, 3) won't be back this season, but they only accumulated 28% of the total for this team. Seven other players had at least one interception and eight players had 1-2 forced fumbles on the season.

Kill's obscene rotating of players actually helped a lot of guys get experience in this regard for good or for better. We've seen the ramifications of his defense being TOO aggressive (the MACC), but overall it was a good young group of athletes that really earned the turnovers that they caused to happen.

Even though the Huskies lost a lot of talent for 2011, I still see them succeeding in terms of forcing turnovers due to their young talent on defense. The key is to keep the defensive line (the strongest part of the defense) chasing the quarterback enough so that the new starters at most of the other spots have a chance to adjust and make plays on their own.

Doeren may have a conservative defense, but it is absolutely vital for them to be aggressive just enough to cause enough turnovers to be successful this upcoming season.