After reading this article on how Harnish won an award for toughness, I thought back on how much the quarterback actually had to endure throughout his career, and it sure was a lot.

One thing I wanted to document was the career of Chandler Harnish, who's legacy overshadows this blog entirely. I started it the season he was redshirting in 2007. We'll be taking a look year-by-year at what went right for Chandler, what went wrong and his highlights along the way. Consider this a reflection of the number one most decorated quarterback in Northern Illinois history.

I spent the past few days reading some of the older stuff that I had written. I must have been one bored kid in college. Oh to have all the time in the world to blog about NIU sports. Enough of this real-life stuff, that was the best back in the day. I like to take claim that I was on the forefront of Northern Illinois coverage back in the day, before Huskie Wire had taken any form just yet. I almost a tear looking back at the old site niusports.blogspot.com. What an achievement it was to make my way on to SBNation.com, the biggest network of blogs on the internet. The media has changed so much to incorporate smaller conferences like the MAC and I am happy to be part of the small niche blogs that started that movement.

With all of the turmoil that Northern Illinois experienced these past few years, one of the only consistent things this team had was Chandler Harnish. After a 2-10 season in 2007, it supposedly was a tight race between Chandler Harnish and what was left of Dan Nicholson to start the 2008 season. The majority of fans thought that Chandler would be the man going in for his first snap, but none of us knew that was going to happen until the first snap of the game. The game against Minnesota was truly a coming out party for Harnish, throwing for 326 yds and two touchdowns to his number one target, Nathan Palmer. Ironically enough, Minnesota would hire Kill three seasons later.

A pair of redshirt freshmen stole the spotlight today. Harnish to Palmer. Harnish to Palmer. We'll be hearing that combo being heard over and over again in the next few years. In case you didn't hear, we only lost by 4 points to a (good) Big 11 team 27-31.

The 2008 season was interesting, if only because Coach Kill had a bunch of leftover parts from the previous regime he had to work with. It was like constructing a car out of parts from a junkyard. It took a lot of work to get something going. It didn't help the growth of Harnish that he went down with an ankle injury in that next game against Western Michigan. Without Harnish, the Huskies went 2-1, with that one loss being the DeMarcus Grady show taking place IN Knoxville. Tennessee loses to the Huskies if Chandler Harnish plays in this game, no doubt about it.

After the loss in Knoxville, Harnish finally returned and in between a couple of wind-blown close wins over Miami OH and Bowling Green was a 38-7 beatdown of Toledo in Dekalb. The Huskies dominated from start to finish and Harnish was 12 of 16 for 173 yds and 3 touchdowns. This was huge, as the Huskies hadn't previously beaten the Rockets in Dekalb since 1989. The team was just about as efficient as could be. Oh and those windblown wins vs middling MAC squads? After coming in vs. Miami OH to replace a felled Grady, Harnish went A combined 9 of 21 for 93 yds passing. Harnish had 2 ints vs BGSU, but made up for it with 113 yds on the ground.

Next up were the make or break games for the Huskies. Could they beat the undefeated Ball State Cardinals? Nope. I have really got to stop getting my hopes up for this team, because that loss burned me so much it spurred my blogging production. That was just a bad, bad game by the Huskies against a great BSU squad led by Brady Hoke. Harnish only went 14 of 22 for 115 and a pick. He also had 59 yds on the ground and a TD. Judging by this picture, you would have thunk we had won that game: 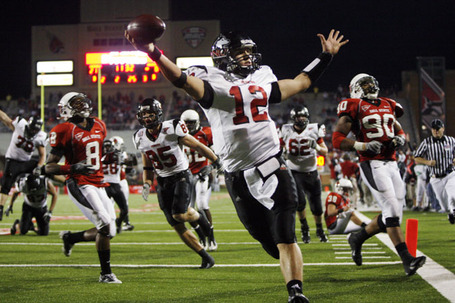 Onward ho to a home game against Central Michigan team that was still in its twilight years with Butch Jones in his second year and LeFevour in his Junior year. The Huskies were down 24, but had a huge comeback and forced the game to OT. Harnish was 18 for 36 with 288 yds. What ended the game was an interception going for it at the end of the game. You can't blame the guy, he was trying to put the team on his back and win the game. However, he just forced it too much. It was a moment of "wow, can this actually happen" to "oh, it's the same old NIU team".

After that? SNOW HIGHLIGHTS against Kent State. In a game nobody watched, Harnish destroyed a weak Kent State team throwing for 173 and 2 tds while rushing for 117 and two more tds.

The biggest stinker of the season came against a strong Navy team and Harnish threw two picks in the freezing cold. Still wondering what happened in that one...

And finally in the Independence Bowl, Harnish had a couple picks in the redzone that didn't help. He wasn't quite there yet, but he also needed some playmakers to step up at wide receiver. NaPalm was injured for this one. I went to that game, and it was just a giant meh all around.

Overall, a series of ups and downs for the Huskie program in a transitional year as Jerry Kill and Chandler Harnish both took the reins for the first time. There were moments of brilliance and this team managed to make a bowl game, somehow. It certainly was a better season than 2007, this program was on it's way back to prominence.

Huskie fans, what are your favorite memories of the 2008 season?