Northern Illinois finishes the season ranked for the first time ever, still 1-0 all-time vs. Alabama.

The Northern Illinois Huskies are ranked in the post-season polls for the first time EVER!

The NIU Huskies are ranked #22 in the AP Poll and #24 in the Coaches Poll in the final postseason rankings for 2012.

This is yet another feather in the cap of this football team and something to just add to the resume of this program for the future.

In light of the 42-12 beatdown that Alabama put on Notre Dame last night, no mention was made of which BCS team has an undefeated record all-time against the Crimson Tide. 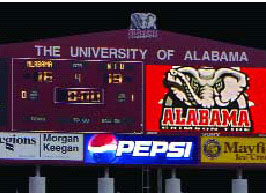 That would be the 2003 NIU Huskies squad that defeated a #21 ranked Alabama Crimson Tide squad in Tuscaloosa on September 20th of that year.

That team would get up to as high as #12 in the rankings and nearly becoming the first ever BCS busters before losing two tough conference road games and not going to a bowl game with a 10-2 record.

This year's squad finished 12-2 and made their way to the BCS with 12-straight victories and a #15 ranking.

All eyes will be on the Huskies as they try and defend their MAC Championship and crash the BCS again as Alabama continues to dodge the Huskies' appearance on any future schedule.